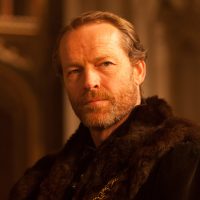 In the aftermath of the Battle of Shrewsbury, Northumberland learns of the death of his son. The Lord Chief Justice attempts on behalf of the increasingly frail king to separate Falstaff from Prince Hal. The rebels continue to plot insurrection. Falstaff is sent to recruit soldiers and takes his leave of his mistress, Doll Tearsheet. The rebel forces are overcome. This brings comfort to the dying king, who is finally reconciled to his son. Falstaff rushes to Hal’s coronation with expectations of high office.

Richly shot and expertly performed, with each and every actor involved delivering their Shakespearean dialogue with utter relish.

Playing the ailing King Henry who will not go gently into the good night, Jeremy Irons gave a performance of equal parts fury and passion that ranks with this actor’s very best. Irons cut a moving, hollow-eyed presence: the ruler’s body seen giving way even as his capacity for remonstration would not.

What stands out from Henry IV are a handful of masterfully acted scenes by phenomenal actors.

These histories deserve to be watched. They are bristling with texture, from episode to episode, and within each episode.

Various award wins and nominations, including:

Richly shot and expertly performed, with each and every actor involved delivering their Shakespearean dialogue with utter relish