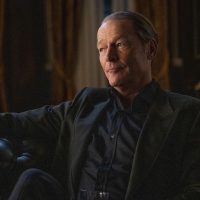 The action moves to the heart of Gotham City, where the Titans reunite with old friends and face new foes.

Season 3 is available to stream on HBO Max in America, and will premiere on Netflix UK on 8th December 2021.

Season 2 is available on HBO Max (US) and Netflix (UK).

The show is a lot of fun, and the action scenes are smooth and brutal. The music choices are still absolutely on point, and the Jason-centric fifth episode is genuinely a good piece of storytelling, due in large part to its tight focus on the character. That episode in particular has some incredibly strong moments between Walters’ Jason and Iain Glen’s Bruce Wayne that prove the show works best when it’s not leaning into shock and awe.

Strong performances and character moments make it the best entry yet in the HBO Max series.

Titans Season 3 takes everything you’ve loved about the series thus far, refines it, and grounds the larger-than-life concepts with poignant moments that convey how difficult and heartbreaking this superhero life can be, and it’s a roller coaster ride well worth taking.

Speaking of exceptional, the show produces one of the most intense hours of television you’ll see all year and, in all honesty, it’s probably the single-greatest hour of Titans ever. A bold statement to make, but mind-blowing would be a generic understatement. And it almost feels wrong of me to say such a thing because I don’t want to undermine the other episodes of the season because each one offers up its own strengths in this intricately-plotted story.

Rating: A. Titans finds its footing with its best selection of episodes yet, offering up a compelling adaptation of one of the greatest DC stories ever told. If it can keep this high standard up throughout the remainder of the season, it’s destined to reach the highs we’ve been waiting for it to obtain for some time.

**** This barnstorming third season really puts Titans on the map.

– We Got This Covered, Martin Carr

Iain Glen’s take on the character of Bruce Wayne is surprisingly memorable in its vulnerability and introspection.

There is no role with greater expectations in the DC universe, and that’s including Superman, than that of Bruce Wayne AKA Batman. There is a tragic dichotomy to the character (sophisticated yet brutal, successful yet tortured, imposing yet vulnerable) which Iain Glen embodies with stoic ambivalence. His Wayne is at times world-weary and exhausted, but also strong and confident–the viewer gets the feeling that even though he’s past his prime, his fearsome reputation is still much deserved.

Glen does a spectacular job of playing two versions of the character: the borderline abusive, tough love father figure in Dick Grayson’s subconscious and the actual Bruce Wayne, a man of guarded magnanimity and an inability to express his feelings to those he loves.