You are here: Home / Theatre / Longing 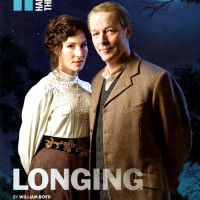 by William Boyd (Based on two short stories by Chekhov)

William Boyd has fused two Chekhov stories from the 1890s, A Visit to Friends and My Life, to create a new play. The result is inevitably something of a hybrid: neither pure Boyd nor pure Chekhov. But it works because it deals with eternal Russian themes – and because it is performed with rare musical precision.
Boyd’s chosen stories neatly intersect. In one, a charismatic Moscow lawyer, Kolia, returns to the provinces to try to rescue Sergei, a heavily indebted drunk whose estate is mortgaged to the hilt. In the other narrative strand we see Misail, an architect’s son who wants to be a roof-painter, trapped into marriage with the daughter of a wealthy vulgarian. What links the stories, which take place in and around a dilapidated summer house, is the shared sense of futility and waste. Kolia’s tragedy is that he is terrified of commitment; Misail’s is that he has made a commitment and now regrets it. Watching Boyd’s ingenious mix-and-match, it is impossible not to be reminded of Chekhov’s future masterpieces. Unrequited love, marital misalliances and auctioned estates usher us into the world of The Seagull, Uncle Vanya and The Cherry Orchard. But although it is tempting to see the play as a Chekhovian medley, what finally matters is its humane stress on the need for endurance.
Nina Raine’s production gains immeasurably from luxury casting. Iain Glen is remarkable as Kolia, suggesting a man who – possibly like Chekhov himself – combines effortless charm and emotional ruthlessness. Tamsin Greig, as the middle-aged doctor clearly besotted by him, subtly evokes the quiet anguish of the unfulfilled heart. And there is a clutch of fine performances from Alan Cox as the alcoholic Sergei, Natasha Little as his despairing wife and William Postlethwaite as the well-born Misail who has a Tolstoyan urge to identify with the workers. Not perhaps a wholly original play, but one that powerfully reminds us that Chekhov’s stories contain the seeds of all his dramas.

The actors are uniformly splendid. A superlative and surprising Vanya for Lucy Bailey last year, Iain Glen offers a penetrating portrayal here of the kind of moulting heart-breaker who can’t, as we say these days, “commit”. And Tamsin Greig is quietly devastating as the pragmatic, lonely doctor, Varia. I love the faint glint of arrogance she gives to the masochism with which the character presses the romantic claims of a younger rival and does any actor stub out cigarettes with a more expressive bleakness than this splendid performer? It’s good to see John Sessions back on stage, too, as a rather oily arriviste.

A new Chekhov play, Longing, has been created by novelist William Boyd from two of the Russian author’s short stories and given a wonderfully skilled and well-cast production by Nina Raine that certainly looks Chekhovian.
Designer Lizzie Clachan provides silver birches and sycamore, birdsong (tits and blackbirds), a colourful betrothal party, samovars and brandy bottles, and a delightful summer house in the wooded corner of a run-down country estate. Boyd has written completely new dialogue that manages not to sound like second-rate spoof Chekhov. The play is tilted towards a melancholic nearly-reunion of Kolia and Varia, and it’s expertly, very touchingly played, with no swooning or sentiment, by Glen (last year’s outstanding Uncle Vanya) and Greig. The young girls, too, are exceptionally good, and Cox and Sessions fill out their contrasting studies in irresponsible alcoholic bonhomie and go-getting, landscape-changing interference with great gusto.

Iain Glen is remarkable as Kolia, suggesting a man who – possibly like Chekhov himself – combines effortless charm and emotional ruthlessness.