You are here: Home / Theatre / The Recruiting Officer 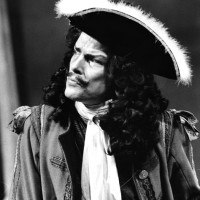 We have a Repertory company back in the main house. That would have gladdened Sir Barry Jackson’s heart – it certainly gladdens mine. The excellent Young Company talented to their graceful fingertips submerge themselves happily in Farquhar’s 18th Century romp and Iain Glen, as Captain Brazen shows us that he is capable of gorgeous clowning. The tone is definitely Wildean, but it is menacing. Shivering with apprehension when a pretty girl, an heiress, or a likely lad, comes into view he is almost a sketch for Baron Munchausen. One recalls his delicate Reindeer, at Christmas, which drew our tears: But Derek Nicholls’s direction is sure and digs deeply into Farquhar’s oblique humour, sardonic and broad by fits and starts.

There are a number of sublimely brazen moments in this spirited, open-planned version of George Farquhar’s Restoration romp. So sublime that they alone would make the evening worthwhile. They are the creation of an excellent young actor by the name of Iain Glen who, apart from tackling a couple of other roles, emerges as a superb Captain Brazen, overblown with airs and graces and a bubbling froth of mannerisms. The comedy brings the Rep’s Young Company back on to the theatre’s main stage for a brief two-week run, There is no doubt that The Young Company have something special about them.

Talent goes on parade. One image has stayed in my mind since I last went to the theatre. It’s a mincing fop flouncing on to the stage with full 18th century regalia and a wonderful “my dear boy” drawl. The actor is Iain Glen. The character is Captain Brazen. The event is George Farquhar’s “The Recruiting officer” at Birmingham Repertory theatre – a play worth seeing for that moment alone. Glen creates a notable personality for Captain Brazen, eccentric, self-important, a further dimension to the classic stage fop which the text offers him.

Iain Glen, as Captain Brazen shows us that he is capable of gorgeous clowning.