You are here: Home / Screen / Mararia 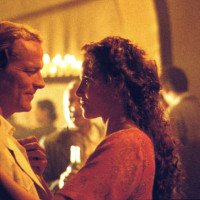 Set amidst the austere volcanic splendor of Spain’s island of Lanzarote, this period piece successfully vacillates between drama and romance as it follows the obsession felt by two very different men for an innocent but seductive local girl.

The tale is set in a ramshackle island village during the Spanish Civil War. No sooner does young, conservative, and high-minded Dr. Fermin arrive at the pueblo than he is under Mararia’s bewitching spell. Freewheeling, roguish English surveyor Bertrand has traveled to the area to research for the Royal Geographic Society. Mararia quickly enchants him, and they become lovers. When Mararia becomes pregnant with Bertrand’s child, the stage is set for tragedy.

This touching romance boasts fine performances from the cast.