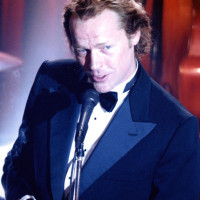 Award winning short film. On a Friday night in London, Alec, an enigmatic homeless man, sits across the street from a black-tie party at a suave hotel.

A chance occurrence gives Alec the opportunity to enter this high society gathering, where the layers of his personality and his past are revealed to an unsuspecting audience. This multi-award winner is a gem.

A really charming short film by Jackie Oudney with Iain Glen utterly compelling as a homeless man who is gifted a chance to shine.