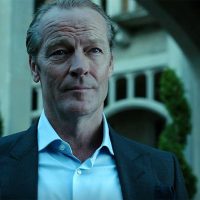 Following the aftermath of their encounter with Trigon, Dick reforms the Titans.

Under his supervision in their new home at Titans Tower, Rachel, Gar and Jason Todd train together to hone their hero abilities and work together as a team. They are joined by Hank Hall and Dawn Granger aka Hawk and Dove and Donna Troy aka Wonder Girl.

Although these original Titans attempt to transition into a regular life, when old enemies resurface everyone must come together to take care of unfinished business. And as this family of old and new Titans – including Conner Kent and Rose Wilson – learn to co-exist, the arrival of Deathstroke, brings to light the sins of the old Titans which threaten to tear this new Titans family apart once more.

Season 2 is available to stream on HBO Max (US) and Netflix (UK).

Glen actually does make for a pretty compelling Bruce Wayne. He’s got the right steely gravel in his voice, along with the necessary aura of quiet dignity and latent cruelty. If the goal with this season is to both put a human face on this mysterious figure while also showing us why Dick Grayson traveled 1000 miles to get away from his old partner, the series has succeeded.

Part of the fun with “Bruce Wayne,” though, is we get to see Glen really play with the character and explore these weird little quirks that may exist only inside Dick’s imagination. It’s not every day you get to see Bruce cavorting onstage with a pair of burlesque dancers. Glen clearly is having some fun playing a ghost haunting Dick’s waking life, and in the process brings a little bit of that self-aware humor that Doom Patrol does so well. At the same time, Glen’s facial work near the end is enough to convey the sense that Bruce does retain a fatherly affection for his ex-sidekick, despite it all.

Iain Glen’s take on the character of Bruce Wayne is surprisingly memorable in its vulnerability and introspection.

There is no role with greater expectations in the DC universe, and that’s including Superman, than that of Bruce Wayne AKA Batman. There is a tragic dichotomy to the character (sophisticated yet brutal, successful yet tortured, imposing yet vulnerable) which Iain Glen embodies with stoic ambivalence. His Wayne is at times world-weary and exhausted, but also strong and confident–the viewer gets the feeling that even though he’s past his prime, his fearsome reputation is still much deserved.

Glen does a spectacular job of playing two versions of the character: the borderline abusive, tough love father figure in Dick Grayson’s subconscious and the actual Bruce Wayne, a man of guarded magnanimity and an inability to express his feelings to those he loves.

Glen makes for a pretty compelling Bruce Wayne. He’s got the right steely gravel in his voice, along with the necessary aura of quiet dignity and latent cruelty