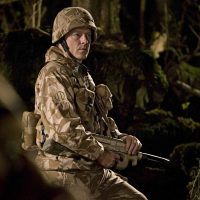 The Doctor and Amy emerge from the TARDIS to find the wreck of the Byzantium spaceship. Down below the Weeping Angels are stirring, but the Doctor has someone else to contend with; none other than the mysterious Professor River Song.

The Doctor, Amy, Dr. Song and the remaining soldiers manage to escape from the crashed ship and into the forest. The Angels attempt to create a rift in time and space much as the Doctor had found in Amy’s room when they first met. Amy meanwhile is counting down from 10 minutes and the Doctor has determined that an Angel has taken over her mind.

Flawlessly paced and, when it mattered, genuinely scary.

In short, a terrific, terrific 45 minutes of television.

‘Flesh and Stone’ packed in a frankly dazzling amount of plot yet still sparkled with stellar turns from the increasingly excellent cast and Moffat’s usual perfectly-pitched dialogue – Father Octavian’s final speech and River Song’s tantalising farewell at the end of the episode being particularly memorable. It was the perfect conclusion to an already stunning Doctor Who story, an absolutely mesmerizing bit of television and the pivotal moment in the mother of all timey-wimey series arcs.

Flawlessly paced and, when it mattered, genuinely scary.