You are here: Home / Screen / Jack Taylor: The Dramatist 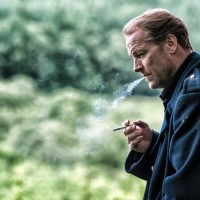 Iain Glen returns, playing troubled ex-cop Jack Taylor, who’s not afraid to get his hands dirty. In the first of three, feature length films, adapted from Ken Bruen’s best-selling crime novels, Jack’s interest is aroused when a young student falls to hear death from a university roof. Traces of Morphine are found in her blood. At first it’s assumed her death was a tragic suicide. But her professor is adamant she would never have taken her own life and asks Jack to investigate.

As always hard-drinking Jack, who amazingly has been on the wagon for six months, is keen to get stuck into the case and enlists the help of a former colleague Kate. His trademark rookie methods and meticulous attention to detail immediately start getting results when he makes a literary connection from a piece of paper found tied around the students wrist to a quotation from the great Irish dramatist JM. Synge. As Galway born Jack probes deeper into what happened a second student is found dead. There is a particularly bizarre and horrible ending to this intriguing mystery.

Where would writers of murder thrillers be without academic settings and literary allusions to lend their tales of brutality an air of intellectual profundity. Iain Glen returned as Galway City’s maverick gumshoe, a recovering alcoholic who used to be a Garda., and found himself instantly immersed in a tale soaked in thhe richness of Irish mythology. JM Synge’s Deidre Of The Sorrows rippled through the plot like blood pulsing in a vein. No surprise that novelist Ken Bruen, who’s stories inspired the series, used to be an English Teacher. Quotes from Synge’s play were scrawled all over this tale, titled The Dramatist, which had Glen’s shambling yet well-read sleuth tangling with Galway’s alarmingly psychotic academic elite, a bunch who specialized in gross moral turpitude. A PhD in Synge would have helped to get all the references. At heart though, this was a good old fashioned revenge tail, lifted a cut above by Glen’s finely judged turn as eloquent Taylor and it’s sharp take on modern Ireland. Glen is at the top of his game in Jack Taylor, one of the most intriguing detectives on TV. He’s a man who can even get away with the line “when I trust people, shit tends to happen.” Can’t quite see Synge penning that one.

Ken Bruen’s novels brought here to winning life by Iain Glen as Jack, do as the best do, which is to say nothing particularly different, just better.
The ending was a true shocker, the acting and story had a sheen of extra class, and Glen, with his big ex-Gardai coat and big deep broth of an accent (I’m no expert on the Galway demotic and stand correctable, but I loved it, particularly the way in which his pronunciation of “hesh” made the drug, perhaps rightly, sound like sweeties) elevated it to a mesmeric 90 minutes. I used to watch, not unjealously, in my school-uniform drinking days in the Antiquary, deep in the bowels of Edinburgh’s St Stephen Street, Nicky Campbell and Iain Glen, best friends possessed of a slightly more expensive school and slightly too in preening love with their individual selves, as is the way with 17-year-olds. And occasionally wondered in my odd way what would become of them as men. I’m unjealously delighted to report that both seem to be making quite the grand fist of things.

Based on the novels of Ken Bruen, the first series of this Irish crime drama was a bit of a hit for Channel 5. Back for a second run of three episodes, it stars Iain Glen as the eponymous hero, a maverick former Garda turned private investigator, a trouble herd-drinking loner who takes on cases that the police won’t touch. Thanks to a pithy script and Glen’s convincing performance this is more like a homage to Hollywood noir.

Glen is at the top of his game in Jack Taylor, one of the most intriguing detectives on TV.