You are here: Home / Theatre / Ghosts 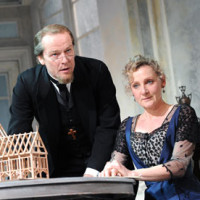 Further proof that English theatre is going through a wonderfully positive patch is furnished now with this terrifically compelling and often disarmingly comic account of Ibsen’s Ghosts. Not only is actor Iain Glen making a most distinguished debut as a director but he is turning in a witheringly satirical performance as Pastor Manders, the sanctimonious clerical hypocrite whose real God is not the Lord but his own fearfully guarded reputation in a community of small-minded backbiters… Lesley Sharpe breaks your heart as Mrs Alving. She’s the mother whose plans to protect her son from the sins of the father (sins that her own repressiveness have caused) have backfired disastrously. A luminous Mrs Alving sounds as counter-intuitive as a “retiring Cleopatra” but here the glinting steel of woman’s progressive thought is as potent, in the earlier episodes, as the excruciating tyre-burn skid marks as she later makes as she backpedals her way into a revelation of truth… Frank McGuiness’s new version derives a lot of energy from pointed but never overdone alliteration… Shockingly good.

Director Glen does not let actor Glen embody only the scary evangelist. True, his Manders works himself into a fit of righteous rage when he’s calling Mrs Alving a sinner and telling her “there’s guilt on your soul”, all because she wasn’t to the roué husband who impregnated her servant and fatally infected her son. There are delicate touches here too; a complacency and conceit reflected in his looming, preening body language, asexual susceptibility suggested by his comical interest in the servant Regina’s young flesh, a hint of vulnerability beneath the scary certainty. This is a fine performance, subtle yet charismatic, one that simultaneously shows the preacher’s power and his weakness. And there is strong support from Malcolm Storry as the sleazy hypocritewho dupes Manders, from Sharp as a Mrs Alving rapturously besotted with her boy and quiet yet firm in her defence of his freethinking; and from Treadaway as an Oswald whose mind as well as his clothes might have been dragged through the jungle. I’ve seen some good Ghosts in my time, but none better than this.

The play works powerfully in Frank McGuiness’s unstuffy new translation. Glen is both comic and chilling as the self-righteous Pastor Manders and his moral collapse when his integrity is subjected to Ibsen’s forensic examination is a joy to behold… Lesley Sharp goes right to the heart of this domestic tragedy. Harry Treadaway memorably captures the twitchy terror of a disease he doesn’t understand and there is strong support from Jessica Raine as the pert maid who isn’t quite what she seems and Malcom Storry as her devious father.