You are here: Home / Theatre / The Resistible Rise Of Arturo Ui 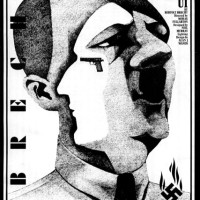 The Resistible Rise Of Arturo Ui

My first professional gig and it could well have been a very short career. Annie Ross, another member of the acting company who was sweet enough to take me under her wing confided many years later that the director Morag Fullerton had been very close to giving me the sack. I suspect in the early days of rehearsal I was trying awfully hard and imbuing the handful of very minor roles allotted me with a significance they really didn’t possess. It makes me blush to think. Annie persuaded her to be patient and I narrowly avoided a humiliation from which it would have been hard to recover.

The Resistible Rise of Arturo Ui, in which the rise of Chicago gangster Arturo Ui, brilliantly conveyed by Peter Jonfield, parallels with biting irony and wit the rise of Hitler in Germany. This is emphasized by news flashes at intervals, informing of events in Germany analogous to those of the play. The most impressive aspect of the production, directed by Morag Fullerton, is the economic yet dynamic way it is staged, adding to the performance a strong visual dimension.

The Resistible Rise of Arturo Ui, parallels with biting irony and wit the rise of Hitler in Germany.