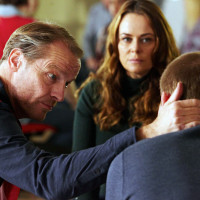 Behind every prisoner, there’s a wife, girlfriend or mother doing time on the outside. For some it’s a nightmare, for others a liberation.

It’s the kind of polished “popular” drama that we don’t see enough of, a cut about the average. Cleverly written, neatly directed and, above all, acted so well that the all-too-real characters live with you beyond the final credits.”
“Prisoners’ Wives gets me every time…because it’s such an involving-to-the-exclusion-of-all-else-drama. It’s so cleverly constructed too. It’s so deftly handled.
As the series progressed, each one changed in ways completely believable that writer Julie Geary and the super cast deserve high praise. I hope there is a second series. We must hang on to this one.

Walker is superb as is Iain Glen. It marks an impressive serious drama debut for ex Hollyoaks star Emma Rigby.

This fantastic drama will have you rearranging your diary so you are free for telly every Tuesday for the next 6 weeks.

A brilliant idea backed up by superb performances. The writing and the acting are first class- very funny lines are mixed with compelling and credible emotional scenes. This is a popular drama out of the top drawer.

Julie Geary’s quietly captivating six-part drama is an exploration of the feelings of isolation, abandonment and resentment experienced by a group of women whose partners are all in prison.

At it’s heart lay a drama about relationships under pressure, but so many themes pumped through it : the cost of loyalty, the price of betrayal, male manipulation, female solidarity, parenting and the Fosterean question of what one owes the state and what one’s family. Against these dilemmas, social divisions dissolved.

A brilliant idea backed up by superb performances.