You are here: Home / Screen / Kingdom of Heaven 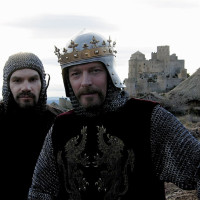 Kingdom of Heaven is an epic adventure about a common man who finds himself thrust into a decades-long war.

A stranger in a strange land, he serves a doomed king, falls in love with an exotic and forbidden queen, and rises to knighthood. Ultimately, he must protect the people of Jerusalem from overwhelming forces – while striving to keep a fragile peace. From Ridley Scott, the master of the modern epic.

Great spectacle, sweeping narrative, heroic deeds and lots of gore. Ridley Scott delivers all the goods for a mighty epic.

A far-reaching period epic that is also relevant to our understanding of the conflicts in the Middle East of the present day.

It is a deeply personal, highly introspective work of artistic expression the likes of which the director hasn’t attempted since Blade Runner.

The battle sequences here are actually worth the cost of admission, and there is exemplary supporting work by Liam Neeson, Jeremy Irons, Edward Norton and especially Syrian actor Ghassan Massoud as the legendary Muslim leader Saladin.

More than ever, Hollywood has become a cinema of fantasy and escapism. But every so often, a powerful director manages to marshal its forces to make a statement or impart a vision that’s courageously relevant to what’s going on in the real world. B+

1 Satellite Award win and 5 nominations, including:

Great spectacle, sweeping narrative, heroic deeds and lots of gore. Ridley Scott delivers all the goods for a mighty epic.