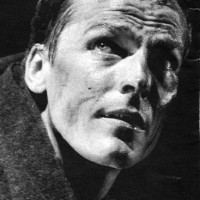 A great Henry V is born. Iain Glen makes a thrilling Stratford Début. The young director Mathew Warchus (at 27 he is the same age as Henry V at Agincourt) sees the play steadily and sees it whole. Having reminded us of modern parallels, Warchus’s production (atmospherically designed by Neil Warmington) doesn’t deprive us of the clanking armour and Plantagenet pageantry that are such an enjoyable part of the play. The battle scenes, with their great whooshes of real flame and deafening explosions, are every bit as exciting as they should be:Any production, however is going to stand or fall with the actor playing Henry V and Iain Glen doesn’t disappoint. He is very sexy (I predict crowds of swooning schoolgirls at the stage door) but he is much more than a slab of lean beefcake. There is a sense of formidable intelligence as he delivers the verse, and he powerfully captures the king’s tortured humanity. In the notorious speech at Harfleur, when Henry V threatens “fresh fair virgins” with the sword, he is clearly a decent man playing a hard-hearted, politically expedient role which he finds almost intolerable. On the eve of Agincourt, his lonely sleepless agony is reminiscent of Christ in the garden. But Glen also touchingly suggests the king’s warm sense of fellowship with his men (especially in the beautifully delivered St Crispin’s Day speech) and, in the lovely wooing scene at the end, this exceptional actor reveals a real flair for comedy. There are other performances to savour. Lional Haft is wonderfully funny as that absurd and garrulous Welshman, Fluellen and Clive Wood plays Pistol with roaring vigour. But this production will undoubtedly be remembered for the achievements of two young men of outstanding talent and extraordinary promise: Iain Glen and Mathew Warchus.

Iain Glen played Henry V last night and won a decisive victory. He went in at the deep end for his debut with the Royal Shakespeare company and emerged three and a half hours later looking like one of the most significant stars the troupe has recruited in a decade. His performance is a multi-faceted masterpiece, a bravura display of actorial skill that shows he has matured into a star in the very best sense of the word.

Shakespeare’s Henry V is the first play about war in the English language; and the moment Mathew Warchus’s new Stratford production begins, you realize that for him, as for Shakespeare, the play speaks with two voices. It speaks of the past, and to the present. Tony Britton is the Chorus, taking the stage with massive confidence: a rock-like, dignified presence in a modern military overcoat with a poppy in his buttonhole. Behind him, a medieval royal robe is displayed, surrounded by poppies on high stalks. You are, simultaneously, in the past and the present:

Iain Glen’s Henry is both prisoner and hero. His heroism, his frank, manly behaviour with his soldiers, is the conduct of a born commander, but also of the cool politician who knows that such inspiration is militarily priceless. His spontaneity is infectious; and yet there is also a deliberateness and a hard remoteness about him that confirms that he did indeed kill Falstaff’s heart and is perfectly capable of ordering the necessary execution. Role by role, Glen is confirming that he is one of the finest and most sensitive actors of his generation. He can create a thrillingly convincing personality out of the most disparate psychological ingredients.

Glen is constantly engaged in the progress of Henry’s thought; seldom in Shakespearean acting do we find thought and word so spontaneously connected. Only while negotiating the terms of his victory after Agincourt does this King relax within his new authority; and in the glow of that relaxation he wins all hearts.

The stage is a hydraulic ramp emblazoned with Henry’s dates, and a portal upstage through which you see blue skies and cawing crows over Agincourt. Gruesome bits of limbs in armour are suspended on chains. This production at once allows us to enjoy the vigour and pageantry of Henry V and see it in varying perspectives. It tells the story, as W B Yeats said it should be told: “Cheerfully, as one watches some handsome spirited horse” but with “tragic irony”. Catch it if you possibly can.

Role by role, Glen is confirming that he is one of the finest and most sensitive actors of his generation.