You are here: Home / Theatre / Wallenstein 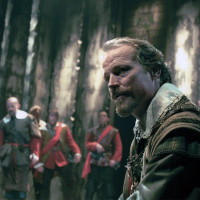 The role of Wallenstein is a great one, endowed by Iain Glen with the perfect mix of arrogance, idealism, vanity and vulnerability. One only wishes Glen spent more time on the classical stage. Angus Jackson’s hurtling production has first-rate support from Anthony Calf as the devious Octavio, John McEnery as a spidery war minister, Tom Brooke as a calculating Swedish colonel and Charlotte Emmerson as the hero’s ruinously intemperate sister-in-law. If you relish historical-political drama on the grand scale, get down to Chichester.

Schiller’s verse drama of a fallen idol, rarely seen here, deserves to be much better known, especially in such a thrilling production as this one by Angus Jackson… Completed in 1799, the trilogy can run to ten hours, and has here been compressed, by Mike Poulton, to less than three…it does not feel rushed – rather, jet-propelled. A superb cast, whose verse-reading is supple and muscular, drive this tale of a military commander who defies God, emperor, and nation until all that awaits him is a knife or a noose.

Mike Poulton is becoming Britain’s Friedrich Schiller… Here’s a piece that makes Shakespeare’s history plays seem morally unsubtle. What’s the meaning of duty, loyalty, oaths? With the protestant Wallenstein obsessively poring over astrological charts, what’s the place of chance, fate, faith, religion in human affairs? Anyone who thinks complexity is a dramatic plus will relish this brisk, bold revival. Glen catches the contradictions of the soldier who sees himself as a new Julius Caesar: chivalric yet arrogant, charismatic yet naïve.

One only wishes Glen spent more time on the classical stage.