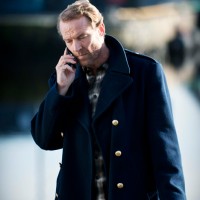 A priest who had just returned from 20 years of working overseas is found beheaded in his church. Father Malachy confesses to Jack that now he himself fears for his life and reveals a tragic story about the murdered priest. The latter had committed a terrible deed before being moved overseas – Father Malachy suspects an act of revenge. After the discovery of another dead body the Guards think they found the priest-murderer. But for Jack and Cody too many questions remain unanswered.

When people ask me what sort of crime fiction I like I always reply ‘local’. I am not particularly interested in people being killed in innovatively gory ways. Nor am I that bothered about solving a puzzle or for that matter the fine detail of forensic investigation. For me a crime is a symptom, a boil on the face of a sick society and it’s the societies that I am really interested in. I like Nordic crime because it tells me something about life in Scandinavian. Ditto Chinese, French, Swiss-German, Mongolian crime thrillers, all of which grace my bookshelves. I’ll shortly be adding some novels by Ken Bruen, whose Jack Taylor series is making for great viewing right now. These stories are not much about fear or fantastically cunning plots as describing an absolutely unique place. Taylor, an ex-cop turned private eye, hangs out in the small city of Galway. People know him there, he is forever bumping into friends and foes from his past. The same themes trickle through every tale like the ever present rain.: the power of the priests, the “Celtic Tiger” boom years gone sour, the drink, the bigotry and the poetry. James Joyce, the famous novelist, who spent most of his life painstakingly describing what was wrong with Ireland while not living there , would have liked Jack Taylor. Last night’s tale, The Priest, was particularly seeped in local detail. Father Royce, a very bad Priest indeed, was found murdered in a church after returning to Ireland after a long exile in Boston. Suspicion fell on the boys he’d abused decades ago.: now troubled men., one was a heroin addict with assorted criminal convictions, the other a rising star of the new recovering business world. In away that ‘s typical of Bruen’s tales, Taylor (Iain Glen) suffered almost as much with his investigation: not one goes by it seems, in which he doesn’t sustain life threatening injuries, lose a loved one or permanently part company with a dear friend. In this one the grizzled ex-policeman couldn’t see eye to eye with his usually rather slow witted assistant Cody (Killian Scott) who perhaps for once had better instincts than his boss. It always works out in the end but you feel every mystery brings Taylor closer to the great pub in the sky.

Thrones star Iain Glen is immensely watchable as the troubled ex-copper who goes looking for clues others have missed. Here he investigates the possible revenge killing of a priest.

When Father Royce returns to Galway following two decades of overseas duty, he rather unluckily finds himself the victim of decapitation. Jack is called to investigate and it soon becomes clear that several former members of Royce’s congregation have been anticipating an opportunity to get even with the clergyman since his emigration., leading to some uneasy confessions for the priest’s former conspirators. Extracting the truth from a world of fiercly protected ecumenical secrets proves to be a tricky task.

Iain Glen is immensely watchable as the troubled ex-copper