You are here: Home / Screen / Game of Thrones V 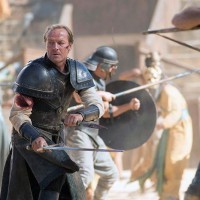 In Meereen, the insurgent “Sons of the Harpy” have started to revolt against Daenerys Targaryen’s regime by murdering citizens and Unsullied, also taking the life of Barristan Selmy. In order to regain peace and control, Daenerys complies with the request of re-opening the fighting pits.

Tyrion Lannister arrives in Pentos along with Varys, and they begin their journey to Meereen together. They pass through Volantis, where Tyrion is abducted by Jorah Mormont, who takes him to Meereen as a way to redeem himself to Daenerys. Daenerys takes Tyrion as her advisor, but orders Jorah exiled once more. After the Sons of the Harpy mount an attack on Daenerys and her retinue at the fighting pits, Jorah saves her life. Drogon reappears and Daenerys flies away on his back. Drogon flies far away from Meereen and Daenerys quickly finds herself surrounded by Dothraki horsemen. Jorah and Daario Naharis leave to search for Daenerys, while Tyrion, Varys, Missandei, and Grey Worm remain to rule Meereen.

At the Wall, Stannis Baratheon has Mance Rayder burned alive for treason. Stannis promises Jon Snow legitimacy and rule of Winterfell should he ride with him against the Boltons, but Jon declines the offer and stays at the Wall. As newly elected Lord Commander of the Night’s Watch, Jon forms an alliance with the Wildlings, much to the dismay of the rest of the Night’s Watch. They begin evacuating Wildlings at Hardhome, when the settlement suddenly comes under attack from White Walkers and their wight armies. Though many die and are revived as wights, the brothers still manage to rescue a large number of Wildlings and Jon leads them through the tunnel to Castle Black, south of the Wall. After Samwell Tarly and Gilly leave for Oldtown and Maester Aemon passes away, the majority of the Night’s Watch become disillusioned with Jon’s leadership and see him as a traitor. They lure Jon into a trap and stab him to death.

In the Vale, Littlefinger puts Robin Arryn in the care of House Royce and leaves for Winterfell with Sansa Stark. Brienne, still loyal to the oath she swore to Catelyn Stark, and her squire Podrick follow them. In Winterfell, Sansa is reunited with Reek and marries Ramsay Bolton to form an alliance between the Vale and the Boltons. Ramsay subjects Sansa to physical and psychological abuse, including raping her on their wedding night while forcing Reek to watch. After Reek reveals to Sansa that he did not kill her brothers Bran and Rickon, the two escape together, jumping off the castle walls.

At his camp in the North, Stannis reluctantly acquiesces to Melisandre’s demands to burn Shireen alive as a sacrifice to the Lord of Light. As a result, his wife Selyse is found hanging from a noose and half of his forces desert him. The remaining Baratheon forces ride for Winterfell, but are soon defeated by the Boltons. In the aftermath of the battle, Stannis is apparently killed by Brienne of Tarth. Melisandre flees for Castle Black.

In King’s Landing, Lancel Lannister returns, now a member of the devoutly religious “Sparrows”. Following the wedding of Margaery Tyrell and Tommen Baratheon, Cersei Lannister begins losing control of Tommen, and with him her power source. She tries to regain her status by authorizing the revival of the Faith Militant, the military wing of the Faith of the Seven. The Sparrows quickly begin imposing their puritanical views upon King’s Landing by ridding it of all “sins”, in the process also seizing Loras Tyrell for being homosexual. They proceed to imprison him, as well as Margaery and Cersei herself for committing various sins. Cersei is released after confessing to adultery with Lancel and being forced to march naked through King’s Landing.

In Dorne, the Sand Snakes, the bastard daughters of Oberyn Martell, seek vengeance against the Lannisters for the death of their father. After a threatening message arrives, Bronn and Jaime Lannister travel to Dorne, planning to rescue Myrcella Baratheon. Oberyn’s brother Doran Martell discovers that Ellaria Sand had sent the message and allows Jaime and Myrcella to leave for King’s Landing, provided Myrcella’s betrothed Trystane Martell joins them and obtains a seat on the Small Council. En route to King’s Landing, Myrcella dies, having been poisoned by Ellaria.

Arya Stark arrives in Braavos and starts training with the Faceless Men, guided by Jaqen H’ghar and another young woman. She disguises herself as an oyster seller and is told to kill a dishonest insurance agent at the harbor. But after Meryn Trant’s arrival, Arya steals a false face from the temple and assassinates him instead. Doing so causes her to go blind.

In it’s fifth season, “Game of Thrones” is as it ever was. Breathtaking, heartbreaking, awe-inspiring and addictive, it remains the single most remarkable feat of television, possibly ever, increasingly admirable for it’s ability to grow rather than simply sustain. No longer content with defining epic television, “Game of Thrones” is poised to redefine it by making a genre built on action and archetypes irrefutably human. The hall-mark of this season is depth rather than breadth.

Let the Game begin. Thrones is back and it’s better than ever. Despite flitting between seven settings, the episode is dark and compelling, hinting at a looming shift in power and perspective.

The scale was awe-inspiring. Hurling Hollywood-level budgets behind a multi-season TV show paid rich rewards this week, from the enormous Gladiator-style sweep of the crowded coliseum arena to thrillingly choreographed fights to the death before a huge, baying audience. Best of all was the fantastic reveal as Ser Jorah (Iain Glen) launched a spear seemingly right at Daenerys’s heart, but in fact at a terrifying lurking figure waiting to assassinate her.
Drogon the dragon made a scene-stealing appearance to scatter the Sons of the Harpy, who were suddenly everywhere, masked and terrifying, with Daenerys and her council outnumbered. As Dany climbed onto Drogon’s back and flew away in her own Neverending Story moment, she was glorious, poised somewhere between bruised fugitive queen and mythical dragon goddess. Emilia Clarke’s defiant, ethereal beauty as Daenerys in these final moments felt historic.

Having spent four magnificent campaigns establishing various constituencies with claims to the Iron Throne, four previewed episodes connect several of them in Fascinating ways, while continuing to add new faces to the already sprawling cast. Operating on a scale like nothing else on TV, and creatively liberated to play the long game stretching into the future, perhaps no project better distinguishes HBO’s status as the leading premium player than David Benioff and DB Weiss’ meticulous adaptation of George RR Martin’s fantasy world.
There are so many fine performances here it’s difficult to single out just a few.
In practical terms, “thrones” exemplifies the perfect model for victory in the pay-to-view, subscription age – program that combines prestige (garnering plenty of award nominations to go with it’s critical superlatives), mass appeal (carving out ratings records by HBO’s standards) and the kind of cultish devotion often reserved for much narrower properties.

The show’s many deviations from the song of Ice and Fire series, rubs some diehards the wrong way, and they’ve also fretted over what will happen when the TV show inevitably outpaces the notoriously slow Martin. (He still has two books to deliver in the series.) For me, that possibility used to be the most significant source of tension in watching the show, a kind of Westeros Singularity I hoped would never come to pass. I’m officially over it: Season 5 of Game of Thrones pulls even further away from the novels and I’m fairly sure it is better for it. With each episode , I have less of an idea where the story is going , which means I might soon be enjoying it the way I did the first season, before I’d read the books.

Game of Thrones Season V received more Primetime Emmy nominations than any show in the history of the awards.