You are here: Home / Screen / Game of Thrones I 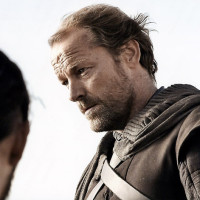 Game of Thrones I

The action begins in the unified Seven Kingdoms of Westeros as the long summer ends and winter draws near. Lord Eddard Stark is asked by his old friend, King Robert Baratheon, to serve as the King’s Hand, following the death of the previous incumbent, Eddard’s mentor Jon Arryn.

Eddard is reluctant, but receives intelligence suggesting that Jon was murdered. He accepts the offer, planning to use his position and authority to investigate the alleged murder.

Meanwhile, on the eastern continent of Essos, the exiled children of House Targaryen, which Robert destroyed to claim the throne, are plotting to return to Westeros and unseat the ‘usurper’. To this end, Viserys Targaryen arranges the marriage of his sister Daenerys to Khal Drogo, the leader of 40,000 Dothraki warriors, in return for the use of those warriors to invade Westeros. For her part, Daenerys just wants to find a safe refuge far away from King Robert’s assassins and her brother’s scheming ambition.

On the northern-most border of the Seven Kingdoms the sworn brothers of the Night’s Watch guard the Wall, a 300-mile-long colossal fortification of ice that has stood for thousands of years. The Watch defends the Wall against the depredations of the lawless wildlings who live beyond, but rumour speaks of a new threat arising in the lands of perpetual winter.

Grade A – …terrific. Gloriously staged, magnificently acted, brilliantly directed… one of those rare programs where you trip over words in a race to praise it… best-written TV show of the year…

The closing credits left me cursing the fact that there was still a week to go before the next installment.

Game of Thrones is a sexy and bloodthirsty epic fantasy.

It could easily have turned into a blur of faces and places but this is focused, precise and utterly compelling.

It’s an X-rated Merlin with a mega-budget and a deviant personality… . Game of Thrones is a fantasy fix for all couch adrenalin junkies.

HBO is magnificently unpredictable. Game of Thrones is its latest multi-million dollar blockbuster – a medieval fantasy adapted from George R R Martin’s series of novels ‘A Song of Ice and Fire’. Described by one of it’s writers as The Sopranos of Middle Earth, there is plenty of enjoyment in the sheer imagination that has been lavished on creating this medieval never-never land.

… worth every single line of effusive blog geekery and promotional buzz…yet another HBO triumph over genre limits…unfolds beautifully and shrewdly…a mastery of TV storytelling…the casting is so sharp, and the acting so vivid, each of the faces is indelible.