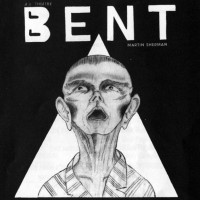 The play was written by Swiss-German Friedrich Durrenmatt after the wholesale destruction of World War 11 and following the explosions of the first and only atomic bombs. The question of scientific responsibility is raised (or avoided) by three physicists… all inmates of an expensive Swiss asylum run by an eccentric sinister psychiatrist. They choose to hide themselves away rather than reveal their discoveries to a world that has yet to demonstrate sufficient moral responsibility. Aberdeen University Theatre entertaining production reveals a play that is a perfectly structured piece of classical theatre and very funny too, with its serious undertones seldom far beneath the surface.

Iain Glen is brilliant as ‘Newton’. Behind his unruffled civility lurked, without the least trace of overacting, the cynical mendacity of a power politician. His acting threw considerable light on what the head of the asylum meant when she declared: “It is I who decide who my patients think they are.”

Fringing” the Festival poses an inevitable challenge – how to winnow wheat from chaff. But when one discovers among the bumper harvest of drama anything as fine as Aberdeen University Theatre’s interpretation of Martin Sherman’s Bent, one feels the search has been worth the effort. The cast is in character – and in difficult roles indeed. This play, ranging from extremes of love to extremes of brutality, makes a plea for understanding tolerance of homosexual love. Act two shows the suffering and degradation which twp homosexuals are made to endure in a Nazi concentration camp. The two men, brilliantly played by Iain Glen and Simon Donald, hold fast to their humanity as long as they can still share a felling of love. Aberdeen shows rare power and maturity here.

The performances of Iain Glen as Mac and Simon Donald as Horst have a quiet authority, and intelligent direction by Nick Peters conveys the horrifying circumstances against which the gradually acknowledged love between the two men develops.

Nicholas Campbell was impressive as Cyprian, a bespectacled and Faust-like seeker after truth, and Iain Glen gave a powerful performance as the sneering Lucifer who seeks to destroy him.

This production has the virtues as well as the faults of student drama. Among the former is the willingness to disinter a classic version of the Faust scene – there being a suavely effective Devil played by Iain Glen. There is also an enthusiasm which proves sporadically infectious when applied to the contemporary setting of Europe. The defects are the usual ones of faulty diction and stagecraft, and a lack of resources to help create the necessary illusion.

Iain Glen is brilliant as ‘Newton’. Behind his unruffled civility lurked, without the least trace of overacting, the cynical mendacity of a power politician.