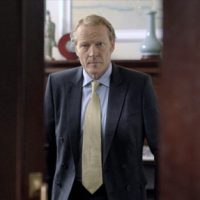 A modern retelling of Shakespeare’s Othello set within the music scene of East London.

Oz and Ivan are lifelong friends and music producers. When Oz gets offered a lucrative recording contract, he makes the decision to separate from Ivan professionally. This rejection turns to rage, as Ivan plots to undermine Oz’s success and get him kicked off the label. The plan kick-starts an escalation of jealousy and paranoia in Oz. With deadly consequences.

The latest from the accomplished British director James Marquand brings you a very clever modern interpretation of Othello. BEAUTIFUL DEVILS takes Shakespeare’s 16th century Venetian (and Cypriot) tale of love, jealousy and paranoia into present day London where the incentive for the hopelessly ambitious young players – substituting for a higher rung on the ladder of Venetian society – is a chance at fame and fortune in contemporary London’s music scene.

The first thing to say about this film is Marquand has elicited excellent performances from his actors and in particular the two leads, with Elliot James Langridge & Osy Ikhile playing respectively the quietly sociopathic and scheming Ivan (Shakespeare’s Iago) and the pathologically wounded Oz (Othello). Perhaps it is because these two actors have worked together on previous film projects (In the Heart of the Sea, The Legend of Tarzan) that they gel so well on screen. The interplay between the twisted motivations of Ivan against Oz’s vulnerabilities, not least his trust in Ivan, is exquisitely portrayed.

There have been numerous film adaptions of Shakespeare’s works over the years. Without going into an extensive list it is worth considering why some succeed and others fail; why Baz Luhrmann’s Romeo & Juliet and Ralph Fiennes Coriolanus are so mesmerising whilst Michael Almereyda’s Hamlet and Geoffrey Wright’s Macbeth were so uninteresting. The key element possibly being that Shakespeare wasn’t about plot as much as he was about depth of character. Those who have tried to merely update a plot have missed the point. Marquand and the writers, Jennifer Majka & Sacha Bennett, have succeeded here because rather than skipping across the plot and doffing their caps to the reference points of the original they have delved inward into what brings these characters alive, and what tears them apart, both individually and collectively. This of course requires great acting from the leads and solid performances all round.

Thankfully then, the supporting cast here hit all the right notes in giving credibility to this story of a young up and coming band seeking fame and fortune via the slinky music executive Archie ‘Tash’ Hoffman, played with aplomb and subtle humour by Rufus Hound. The flux between the band and the industry exec falls to their manager Louis – solidly played by Steven Waddington (The Imitation Game, The Sweeney) as the man in the middle of it all attempting to be both an inspiring and pacifying influence over the increasingly disturbed Oz – and other band members – as their world implodes.

Shakespeare’s Desdemona manifests in this story as Darcy, played by Rachel Hurd-Wood. Hurd-Wood has been acting since she played Wendy Darling in Peter Pan at 12 years of age. In other roles she has played opposite the late great Alan Rickman (Perfume: The Story of a Murderer), Donald Sutherland & Sissy Spacek (An American Haunting) and her experience is brought to the fore here in revealing Darcy’s inner turmoil as her deep love for Oz is gradually overtaken by feelings of confusion and dread; and as she tries to remain a loving daughter to her father, a loyal lover to Oz, and an independent woman.

Iain Glen (Resident Evil, Game of Thrones) as Darcy’s doting father caught between protecting his daughter and fear of driving her away is sublimely written and performed. Glen’s sensitivity in expressing the helplessness the father feels mingled with the longing to be close to his daughter is faultless. Glen does not take up much screen time but the impression he makes in the emotional stakes of this tale shouldn’t be underestimated ; it is him we feel most deeply for as the curtain closes.

The writers seem to have enjoyed meeting the challenge of marrying their plot to its Shakespearean reference points – Othello’s handkerchief becoming Oz’s T-Shirt, for example – they inject some delightful contemporary dialogue along the way. And although the story is necessarily a tragedy they manage to include some humorous set pieces and many lovely quips and in-jokes which are always subtly delivered and add to the reality of the context.

Marquand has crafted a surprisingly effective drama that boasts an impressive production design, as well as sound design, which accompanies his strong ensemble of performers. The modern London setting lends the story an urban grunge aesthetic, as the cinematography captures the energy of the city’s music culture in a raw and stylised way. Add the reliable story of OTHELLO at the heart of the film and there’s no doubt that BEAUTIFUL DEVILS delivers a product that’s far more impressive than it’s modest budget ought to offer.

Beautiful Devils is a provocative reimagining of a classic narrative that uses it’s contemporary landscape with dramatic effect and delivers a strong character-driven story. With an energetic rock n’ roll soundtrack and a bang-for-buck production value, it is sure to impress its unsuspecting audience.

Glen does not take up much screen time but… it is him we feel most deeply for as the curtain closes.