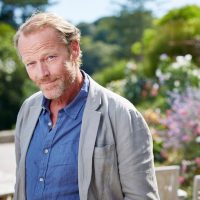 Leo owes much of his success to Gina’s exceptional cooking, but since leaving her for the glamorous Sam (Emilia Fox), his business has continued to thrive.

When Sam has suspicions that Leo is having an affair she confides in Gina, confident that she’ll recognise the signs. Only to later discover that it’s Gina herself who is the ‘other woman’. The secrets and scandals that spill out are proof that sleeping with another woman’s husband is never a good idea – even if he was your husband first.

As Sam and Gina try to fix their broken families, will a friendship rise from the ashes of betrayal or will they tear each other apart?

Delicious is an honest and compelling story of love, sex, lies and betrayal, where things are never as they seem.

The series has offered a visual feast but it’s the sure-footed storytelling and strong central performances that has got me hooked.

Dawn French and Iain Glen are cooking up a storm in Sky 1’s tasty new drama.

There is an impressive cast for this new four-part drama by Dan Sefton. Dawn French tops the bill as a Sicilian cook called Gina who is divorced from chef and hotel owner Leo, played by Iain Glen. She also happens to be friends with his new partner Sam (Emilia Fox), who suspects Leo is cheating on her. Gina, of course, would know all the telltale signs. Sheila Hancock co-stars as Leo’s mother Mimi.

But the truly tasty and intriguing thing about this drama is its sudden change of direction at the end of the first instalment. Set in Cornwall it looks beautiful as well. But it is not unalloyed cheer. A suicidal Michelin judge Sam and Leo’s troubled anorexic daughter add a dark and piquant edge to an ultimately satisfying platter.