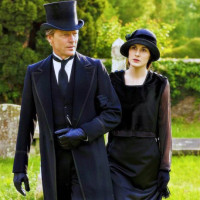 The second series of Downton Abbey, Carnival Films’ immensely popular period drama, begins with a bang. Even before the title sequence of the first episode, we are plunged into the muddy hell of the Battle of the Somme.

Matthew Crawley, the heir to Lord Grantham at Downton, is now an officer fighting on the Western Front. It is quite a contrast to the beautifully manicured gardens, exquisite outfits and even more exquisite manners of the first series.

Soon, however, the War enters the doors of Downton Abbey. The stately home is converted into a convalescent hospital for wounded officers, and everyone, both upstairs and down, has to play their part in the War effort. This backdrop immediately raises the stakes and invests proceedings with an inevitable poignancy. Almost a century after it happened, that most cataclysmic of wars continues to haunt. The delicacy of this finely executed period drama is all about what is not said and what lies under the surface. A remedy for the naked exhibitionism of today’s world.

The Great War is looking like it’s going to cast a very serious pall indeed over Downton Abbey, as of course it must. And Fellowes’s decision to concentrate on those at home rather than the soldiers at the front is proving an excellent one, giving the viewer some genuine insight into the helpless anxiety of those who were left behind . . . Iain Glen, who plays Sir Richard Carlisle (Lady Mary’s new beau), is a subtle, clever actor, and can do nasty with the best of them when the moment truly requires it.

Pure Class from top to toe.

Downton Abbey entered the Guinness Book of World Records as the ‘most critically acclaimed television show’ of the year, becoming the first British show to win the award.

The series has won or been nominated in all the major TV awards both sides of the Atlantic including:

Iain Glen, who plays Sir Richard Carlisle (Lady Mary’s new beau), is a subtle, clever actor, and can do nasty with the best of them when the moment truly requires it.