You are here: Home / Screen / Fools of Fortune 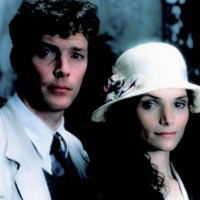 This an intensely moving story of young love set in 1918 rural Ireland.

We see how three generations of the same family are shattered by the Anglo-Irish conflict. ‘Fools of Fortuneê takes place on the huge estate of the Quintons. Sheltered from the economic and political travails all around them, they are shocked into the real world when one of their workers is ritualistically murdered. Previously noncommittal, the family is thrust into the middle of the struggle. After a deadly confrontation in which most of his loved ones are killed, young Willie vows revenge and embarks on a journey of political intrigue, love and self exile.

This is unquestionably O’Connor’s finest film to date. Julie Christie is superb as Mrs. Quinton, disintegrating from a serene and beautiful matriarch to a distracted alcoholic. Mastrantonio similarly shines in a selfless portrayal of an English girl who is forced to rely on the kindness of strangers. As Willie Iain Glen delivers the performance he has been promising for years, an innocent destroyed, he haunts the film like a damned soul, dredging his psyche for grace notes of despair. “Fools of Fortune” is a remarkable achievement not least for capturing the essence of William Trevorês novel and illustrating how the apparently tranquil lives of good people are prey to acts of sudden, shuddering violence.

“Fools of Fortune” is beautifully acted and well crafted. Iain Glen as Willie is deeply moving, humane and believable, all qualities that an allegory requires.

Compelling with a moving story and powerful performances.

Iain Glen delivers the performance he has been promising for years, an innocent destroyed, he haunts the film like a damned soul, dredging his psyche for grace notes of despair.