You are here: Home / Screen / Game of Thrones Season II 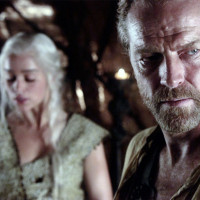 The Seven Kingdoms are at war. The King in the North, Robb Stark, who is fighting to win independence for his people, decides that he must win the allegiance of the fiercely independent Ironborn to dethrone Joffrey Baratheon who holds the Iron Throne with the backing of the powerful House Lannister.

Joffrey’s uncle Renly also has claims to the throne with the support of House Tyrell, whose armies are significantly larger. As they struggle for ascendancy Tyrion Lannister arrives in King’s Landing to take matters in hand, only to face opposition from his scheming sister, Cersei, now the Queen Regent.

Yet another faction enters the picture claiming sovereignty. Stannis Baratheon, Robert’s younger brother and Renly’s older is a proven battle commander and veteran of several wars, known to be utterly without mercy to his enemies. Advising him is Melisandre, an enigmatic priestess from the east, who believes Stannis is bound for a greater destiny.

Far to the east, Daenerys Targaryen has hatched the only three dragons in the world. They will grow into terrifying monsters capable of destroying cities at her command, but for now they are still hatchlings and vulnerable. With her Khalasar gone, Daenerys and her loyal knight Ser Jorah Mormont accompanied by a small band of followers must find a way across a forbidding wasteland and find new allies to support her claim to the Throne.

Forgotten by all in the distant north, the Night’s Watch has mounted an expedition beyond the Wall, searching for missing rangers and investigating rumours of wildlings amassing in the mountains. For Jon Snow this will be a rite of passage as he is asked to make difficult choices, for the realm and for himself.

. . . pulls you in – and doesn’t let go. . .a great and thundering series. . .intrigue bristling with vivid characters, cross-hatched with tantalizing plotlines. . . wild and bewitching . . .rare alchemy. . .

So engrossing, everything from the acting and the writing to the sumptuous sets and creative storytelling is top-notch.

Masterful Epic . . . impossible not to succumb to its visceral dark magic.

. . . what elevates Game of Thrones above the gratuitous cut and thrust of Rome and its HBO stable mates, is the wit and complexity of David Benioff and D. B. Weiss’s script and the quality of the acting from mainly British cast.