You are here: Home / Screen / Game of Thrones IV 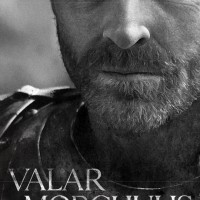 In King’s Landing, guests begin arriving for Joffrey Baratheon and Margaery Tyrell’s wedding, including the vengeful Oberyn Martell. After Joffrey is poisoned at his wedding by Margaery’s grandmother, Olenna Tyrell, a distraught Cersei Lannister is quick to blame her younger brother, Tyrion, for the death of her son. Tyrion struggles to survive these accusations as he is pitted against both his father and his sister while he is abandoned by all those he once held dear. The Martells, the ruling family of Dorne, are represented at the wedding by Prince Oberyn; like the rest of his family and many others, Oberyn has a deeply personal reason to despise the Lannister regime.

The remaining Stark children have all embarked on their separate journeys, aware that they have no home to return to anymore. Sansa Stark successfully escapes King’s Landing with the help of Petyr Baelish, only to come into conflict with her jealous aunt, Lysa Arryn, who mistrusts the relationship between Petyr and Sansa. Meanwhile, Arya Stark is still heading to the Eyrie, accompanied by Sandor Clegane, who hopes he will receive payment for delivering her safely to one of her living relatives. Lastly, Bran Stark, accompanied by the Reeds and Hodor, continues his mission north of the Wall trying to find the three-eyed raven he has been dreaming about.

At the Wall, a recently returned Jon Snow tries to warn his leaders about Mance Rayder’s impending attack on the Wall from both sides. The southern attack is being led by Tormund Giantsbane and Ygritte, who have recently joined forces with another Wildling tribe: the Thenns. Also returned to the Wall, Samwell Tarly struggles with his feelings for the wildling girl, Gilly, and the impact she is having on the Night’s Watch.

Elsewhere, Davos Seaworth is ambitiously trying to restore Stannis Baratheon’s army in preparation for its journey to the Wall, while Roose Bolton enlists his bastard Ramsay Snow, an enslaved Theon Greyjoy, and Locke to help cement his claim to the North.

Across the Narrow Sea, Daenerys Targaryen continues her conquest of Slaver’s Bay by taking control of the largest city, Meereen. Once Meereen is claimed, Daenerys decides to stay and learn to rule before making her return to Westeros. While in Meereen, she deals with the hardships of ruling, a blooming love interest, and a devastating betrayal.

Game of Thrones is an exceptional show in its prime, and it knows it.

All hail the most epic drama to ever hit the small screen.

The most trenchant, brave and brutal examination of power on television.

What gives Game of Thrones edge over rivals is the quality of the human moments between the sex, gore, violence and action.

It’s the show that everyone is talking about and for a very good reason ­ it’s stunning, movie-scale storytelling, packed with swords, sex and more twists than an extra-large Curly Wurly.

Some of the most sophisticated and brilliantly made dramatic television I’ve seen on the small screen.

The wait is finally over as the most anticipated show returns for a forth series and the battle for the Iron Throne of Westeros resumes in earnest. In terms of scale and ambition it can’t be matched. Who would have thought that fantasy could be so cool?