You are here: Home / Screen / Game of Thrones VIII 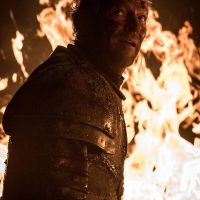 Upon reaching Winterfell with their combined armies, Jon and Daenerys learn the Army of the Dead has breached the Wall, and the Night King commands the undead Viserion. The Northern Houses and their allies rally around Winterfell, but distrust Daenerys and doubt Cersei’s pledge to send troops. Euron returns to King’s Landing with the Golden Company and entices Cersei to consummate their union. On Cersei’s orders, Qyburn hires Bronn to assassinate Tyrion and Jaime. Theon rescues Yara, who then sets out to retake the Iron Islands, while Theon returns to Winterfell. At Winterfell, Jon reunites with Bran and Arya, and later learns to ride Rhaegal. Sam meets Daenerys, who states that she executed his father and brother. Sam reveals to Jon that he is actually Aegon Targaryen. At House Umber’s seat of Last Hearth, Tormund and Beric encounter Edd and other Night’s Watch members. They find the castle’s occupants dead, and the wight of Ned Umber is left as a gruesome message. Jaime arrives at Winterfell where Bran awaits him.
Jaime reveals Cersei’s deception to the Targaryen-Stark alliance and joins them after Brienne vouches for his loyalty. Jaime later apologizes to Bran for crippling him; Bran replies he harbors no anger and says they are no longer the same people. Tyrion loses Daenerys’ trust for having believed Cersei, prompting Jorah to ask her to forgive Tyrion’s mistakes. Citing their mutual love for Jon, Daenerys tries and fails to gain Sansa’s trust after refusing to give assurances about the North’s fate. Theon, Edd, Tormund, and Beric arrive at Winterfell, with the latter three reporting the undead army’s impending arrival. Bran proposes that he lure out the Night King, who wants to destroy the Three-Eyed Raven. The others agree, with Theon and the Ironborn offering Bran protection. Arya seduces Gendry. Jaime formally anoints Brienne as a knight. Jorah fails to dissuade Lyanna Mormont from fighting, and he receives House Tarly’s ancestral sword as a gift from Sam. As the Army of the Dead approaches, Jon reveals his Targaryen lineage to Daenerys.
The Living Army meets the Army of the Dead outside Winterfell. The initial Dothraki charge is decimated, and the Unsullied are quickly overwhelmed. Edd is killed while saving Sam. The survivors retreat into the castle as Melisandre ignites the defensive fire trench surrounding Winterfell to delay the advancing horde. Jon and Daenerys engage the Night King on their dragons. The wights invade Winterfell, overpowering the defenders and killing Lyanna Mormont. Beric dies defending Arya. Jon and Rhaegal knock the Night King off Viserion, and Daenerys burns him with dragonfire but it has no effect. The Night King then raises slain Winterfell defenders, including the dead entombed in the crypt where the non-combatants are attacked. After wights pull Daenerys from Drogon, Jorah is fatally wounded defending her. The Night King arrives at the Godswood for Bran and kills Theon. Arya ambushes the Night King, stabbing him with her Valyrian steel dagger. The Night King and his White Walkers shatter, causing Viserion and the wights to collapse. Her purpose served, Melisandre allows herself to die from old age.

The survivors mourn and burn the dead. Daenerys legitimizes Gendry as a Baratheon, naming him Lord of Storm’s End. Arya declines Gendry’s subsequent marriage proposal. Jaime and Brienne become lovers. To protect her claim to the throne, Daenerys wants Jon to conceal his true parentage. Bronn arrives to kill Jaime and Tyrion for Cersei, but spares them in exchange for being promised Highgarden castle. Jon reveals his Targaryen claim to Sansa and Arya, swearing them to secrecy. Wanting Jon as king, Sansa tells Tyrion, who informs Varys. Arya and the Hound head for King’s Landing, bent on revenge. Tormund returns north with the Wildlings, taking Ghost at Jon’s request. Daenerys and her fleet set sail for King’s Landing, while Jon leads the Northern army. At Dragonstone, Euron’s navy ambushes her fleet, killing Rhaegal with ship-mounted scorpions. Missandei is taken hostage. Daenerys considers seizing King’s Landing
Varys urges Jon to advance his claim, but the latter refuses to betray Daenerys. After Tyrion reveals Varys’ plot, Daenerys executes Varys by dragon fire. Jaime is captured, but Tyrion releases him so he can persuade Cersei to surrender the city, then escape Westeros together. Jaime, Arya, and the Hound each infiltrate King’s Landing. Dragon-borne Daenerys destroys the Iron Fleet and most of the city’s defenses, allowing her army to enter. Cersei’s forces are quickly overwhelmed and the city signals its surrender, but an enraged Daenerys begins leveling the city, burning soldiers and civilians. The allied army follows her lead, slaughtering anyone in their path, horrifying Tyrion and Jon. Jaime kills Euron but is himself mortally wounded. The Hound convinces Arya to abandon her longtime vendetta and save herself, then confronts the Mountain. The brothers ultimately perish after falling from a tower into flames. Cersei and Jaime reunite but are killed as the Red Keep collapses atop them. Jon calls for a retreat as frantic civilians flee the devastation. Arya barely survives.
using dragonfire. Varys and Tyrion debate whether Jon would be a better ruler than Daenerys. Jaime feels compelled to return to Cersei, despite Brienne’s plea that he stay. Cersei defiantly refuses Daenerys’ demand to surrender and has Missandei beheaded before an enraged Daenerys and Grey Worm.
Following the battle, the Unsullied execute captured soldiers upon Daenerys’ orders. Tyrion finds Jaime and Cersei dead in the ruins. Daenerys rallies the Unsullied and Dothraki, declaring she will lead them to liberate the entire world. Tyrion denounces her and resigns as Hand, then is imprisoned for treason to await execution. Arya and Tyrion separately warn Jon that Daenerys is a threat to him and House Stark. Jon confronts Daenerys and, unable to halt her destructive path, kills her. Drogon melts the Iron Throne, then gently carries Daenerys’ body away. Tyrion proposes that all future monarchs be chosen by Westerosi leaders, rather than through familial succession. Bran Stark is proclaimed king, titled Bran the Broken. He grants Sansa the North’s secession as an independent kingdom, and appoints Tyrion as his Hand. Jon is sentenced to the Night’s Watch to appease the Unsullied, who then set sail for Naath, Missandei’s homeland. Tyrion reorganizes the Small Council – Brienne, Bronn, Davos, and Sam – to rebuild King’s Landing. Podrick is knighted. Sansa is crowned Queen in the North. Arya sets sail to explore west of Westeros. Jon rejoins Tormund and Ghost at Castle Black, leading the Wildlings north of the Wall.

Loved the end of Game of Thrones. Stately slow, immense, roughly silent, which is everything it should have been, while wrapping with wit, lack of urgency, cadences worthy of Chopin’s preludes. Strikes me most of the best survived. That split-second vision of Daenerys with horned wings as her Drogon rose behind, the perfection of the dropped Wall gate echoing the very first episode of the very first series … all was pretty much perfect. – And to all the hundreds of thousands online who want an entire rewrite of the entire last series, you do know this is something “fictional” on “television”, yes?”

Stately slow, immense, roughly silent, which is everything it should have been, while wrapping with wit, lack of urgency, cadences worthy of Chopin’s preludes.

… all was pretty much perfect