You are here: Home / Screen / Mountains of The Moon 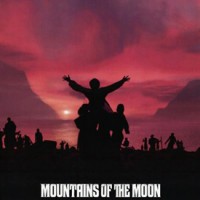 Mountains of The Moon

In the 1850’s two British Officers, Capt. Richard Burton and Lt. John Speke set out on a spectacular adventure to discover the source of the Nile.

They are warned that great dangers await them but against all odds they push deeper and deeper into the magnificent, untamed African wilderness, where no Western man had ever gone. As the difficult journey takes its toil, Burton and Speke forge a strong bond. A bond that one will eventually betray. History will be the judge as the two intrepid explorers venture into realms perilous to both body and soul in their quest for the secret of the Nile.

Mountains of the Moon completely disarmed me when I saw it twenty-four years ago, and I included it in my book Leonard Maltin’s 151 Best Movies You’ve Never Seen. It’s a sleeper that’s still waiting to be discovered. Nothing in the portfolio of talented writer-director Bob Rafelson would lead anyone to expect a film as grand, or far-reaching in its ambitions, as this. A handsomely-mounted, epic saga, photographed by the great Roger Deakins, it turns back the clock to a time when the English-speaking world was captivated by daring explorers like Sir Richard Burton. At a time when travel was arduous and methods of communication primitive, he didn’t hesitate to leave Victorian England, and his wife, behind to embark on bold, dangerous expeditions. (He had many other talents and interests, including linguistics and a fascination with erotica that inspired him to translate the Kama Sutra.) This film focuses on his search for the source of the Nile River in the mid-1800s. Patrick Bergin, who should have springboarded to stardom on the strength of this performance, is a charismatic Burton, with Iain Glen equally well-cast as John Hanning Speke, the ambitious dilettante who accompanies him.

Historians have speculated about the relationship between these two disparate men—one a genuine adventurer, the other an opportunist—who eventually became bitter enemies. Each man also flirted with homosexual desire for the other, although to what degree, we’ll never know.
Because the screenplay for Mountains of the Moon is based in part on the men’s surviving journals, there are vivid, eye-filling details of their exploits in Africa. Their groundbreaking exploration of that continent is a major element of the film. It is also inspired by a biographical novel written by William Harrison, who collaborated with Rafelson on the script, so we cannot take everything we see as gospel truth. But what makes this film so special is that it manages to embrace the sweep of an epic with the compelling details of a highly personal story. It isn’t an old-fashioned “boys’ adventure” like King Solomon’s Mines, but a realistic drama about the hardships these men faced on their journeys, and the equally trying problems they had to confront upon their return.

It certainly captures the spirit of its time, when men like Burton defied the constraints of Victorian behavior and Speke sought personal gain in a way that seems curiously modern.

Rafelson has always been attracted to the outsider, maverick heroes and in Burton he has chosen one of the great mavericks in history. Patrick Burton rises to the challenge with a performance that is complex and charismatic. Even more impressive is Iain Glen, playing the flawed, tormented Speke, a social misfit despite having been born into the English establishment. Here is a young British screen actor who should be in the running for the Oscars… The superb action sequences and landscape photography are on a scale not seen since ‘Lawrence of Arabia’.

This is a visually impressive and imaginatively absorbing film. The performances are, without exception, excellent.

The magic blazes in the wilderness: a desert attack of shocking brutality; a fevered hallucination; an etiolated Speke strapping on his courage like a foreign uniform and tramping off into the next mirage… ‘Mountains Of The Moon’ is re-landscaping of a vivid, enjoyable kind and the best picture book costume drama this Easter’.

Even more impressive is Iain Glen. Here is a young British screen actor who should be in the running for the Oscars.