You are here: Home / Screen / Resident Evil The Final Chapter 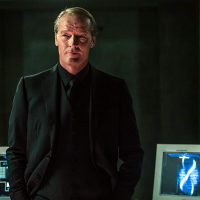 Alice returns to where the nightmare began: The Hive in Raccoon City, where the Umbrella Corporation is gathering its forces for a final strike against the only remaining survivors of the apocalypse.

Because their director, Paul W. S. Anderson, is an exceptional talent in action cinema, and because their star, Milla Jovovich, is a charismatic, exceptional and very credibly kinetic action performer, the movies in the “Resident Evil” franchise, of which this is the sixth, have always been a terrific time.

The film is driven by the inimitable presence of Milla Jovovich as Alice, the first female character to stand as the unquestioned center of a long-running genre franchise since Sigourney Weaver fronted the Alien films. Even after 15 years of mashing mutants, she still brings enough energy and panache to the franchise, not to mention a commanding physical presence.
The Final Chapter may actually be the best of the bunch. It dovetails with the original movie more elegantly than any of the four sequels that precede it. For the first time, the story supports and adds to the action rather than distract from it; it’s almost as though Anderson was holding back in the earlier films because he wanted to save the best for last.”
Movie fans are in for a better-than-average entry. It was fun following your story, Alice.
The action is non-stop. Jovovich delivers yet another kick ass performance as our favourite female action heroines. This final film will not disappoint.

According to director Paul W. S. Anderson and star Milla Jovovich, this is definitely, without question, the last instalment in the Resident Evil film series that launched in 2002, inspired by the computer games of the same title.
Time, then, to pay tribute to all the pleasure these movies have given over the years – all those zombies, mutants, clones, motorcycle chases, subterranean showdowns, last-minute rescues, and mind-bending revelations about the past of Jovovich’s heroine Alice, a high-cheekboned warrior seemingly born to battle the plague unleashed on the world by the nefarious Umbrella Corporation.
With its shadowy, desaturated look, this farewell performance has an undeniable downbeat quality especially compared with its immediate precedessor, the psychedelic Resident Evil: Retribution from 2012. A decade after the original viral outbreak, the world lies in ruins, and it’s a matter of hours before the last surviving humans succumb. But Alice still has hope – enough to get her racing against time towards the Hive, the underground laboratory where the whole nightmare began.
Some of the set-pieces that follow – especially one where Alice is captured and literally made to run for her life – suggest that Anderson has taken a long hard look at George Miller’s recent Mad Max: Fury Road, the current gold standard for post-apocalyptic action cinema. While he can’t match Miller’s imaginative intensity (or his budget), he too combines post-punk excess with the skill of an expert engineer – contrasting wide-open spaces with claustrophobic ones, and carrying rapid cutting to the edge of delirium while ensuring that the essential narrative information comes through.
Part of the charm of these pulpy films lies in their lack of pretension, the way they rarely pause for breath. While Jovovich ranks among cinema’s all-time great action heroines, Alice’s comrades barely register even as types: there’s no feeling of loss when one is sliced up in a turbine and another revealed as a turncoat.
On the other hand, Anderson does allow himself some audacious hints of religious allegory, with the ruthless scientist Dr Isaacs (Iain Glen) explicitly equating himself with the God of the Old Testament, and Alice portrayed as a Christ figure who forms part of a new, feminine Holy Trinity. Crucial too is the role of Alice’s long-term adversary the Red Queen, manifests as a hologram, played by Anderson and Jovovich’s nine-year-old daughter Ever – confirmation, if any is needed, that the saga has been personal for its creators all along.

Non-stop action. They have saved the best for last.

The best of the franchise.