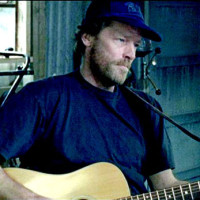 Doug, an aspiring country singer, has spent his life as a loser in a non descript small town with nobody believing in his heartbreaking voice and talent as a musician.

His wife has left him and only his best friend believes in him. But he has one last chance to make it…

Heery’s film has an amiable air, but it ripples with the quiet horror of unfulfilled promise. Even in this desolate town, with it’s oddly Midwestern flavour of dingy barrooms and the ever-present background hum of the local country music station., there’s an obvious opportunity for Doug to pursue his songwriting ambitions. The tragedy of Small Engine Repairs is that he lacks the confidence to take his chances, afraid of the rejection of the songs so close to his heart. He is an inert and pathetic figure, yet so compellingly played by Iain Glen – his face often shielded by the visor of his baseball cap; his eyes glazed with tears- that he becomes deeply sympathetic. His mounting confidence provides the film with a touching trajectory. Heery, working from his original screenplay, has crafted a unique coming of age narrative in which the characters, while deep into adulthood, still have to take steps to realize their potential. His sweet natured, yet frequently penetrating, character study presents men reawakening to the idea of fulfillment. This modest affecting film pulls no punches but wears its own small engine proudly on its sleeve.

A gentle, multi-faceted gem set in an Irish village touches the heart of our correspondent:Glen is a revelation of wounded glances and a shuffling, broken mein. When he sing ” If I could only fly, I’d bid this place goodbye” he might just move you to tears.

In Small Engine Repair, his modest, highly promising feature debut as writer-director, Niall Heery brings a fresh eye to bear on traditional Irish themes: small-town despair; living through pipe dreams; the need of the young to flee the nest for more promising places. The people involved are hooked on small-town Americana and it might well have been called The Playboys of the Country-and-Western World. There’s something peculiarly poignant about these people living at one remove from life and not getting their share of Ireland’s tiger economy. This is a confident, perceptive movie, both funny and sad, and the performances are first-rate.

This is a film about far-reaching dreams that run under the surface of invisible lives. Heery’s shots of the Irish logging town conjure a place once beautiful and claustrophobic. And it is Iain Glen’s brilliantly understated performance of the sensitive, troubled Doug that elevates Small Engine Repair above the competition.

Evoking pleasant shades of Wim Wenders’ Paris Texas:remarkably poignant. At its heart is a subtle and gently comic turn from Iain Glen:A rare, flawless film, brave enough to plough its own furrow.

Iain Glen gives an effecting performance of male vulnerability. Steven Mackintosh is equally adept as a man has the tool for engine repair but can’t crank his own life:Niall Heery is exploring an aspect of Ireland that lies on the far side of the boom. This is an admirable first film of quiet restraint and emotional honesty.

The film is held together by Glen, whose modest character and Johnny Cash-like basso profundo on stage are enough to make him very touching.

It is Iain Glen’s brilliantly understated performance of the sensitive, troubled Doug that elevates Small Engine Repair above the competition.