You are here: Home / Screen / The Fear 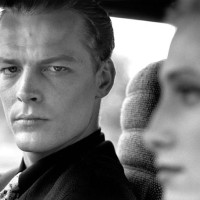 Carl Galton is a product of the London of the 1980’s, a new breed of young Armani clad gangster, who deal in extortion and protection rackets in Islington.

Everything is hunky dory until Carl’s younger brother goes to a bar in the East End – a rival territory – and gets killed in a brawl. Carl, who starts off merely wanting to exact his revenge, realizes that there is territory here for the taking. The argot of London wide boys with narrow lapels is extremely well observed and the camera glides stylishly across glossy magazines, grotty flats and London streets gilded with the reflected glare of mercury lights. This is Paul Hines’ first attempt at writing drama and Euston Films has discovered a major talent. Spread over five compelling episodes it is a thriller that is tailor-made to fit its market. It’s all here – wonderful acting, atmospheric music, the elliptical method of story telling and the kind of direction and camerawork that composes each frame with meticulous care. ‘The Fear’ is the first of it’s kind and will no doubt spawn many inferior imitations.

Iain Glen’s performance as Carl Galton, the 24 year old Islington racketeer is never less than riveting. Coolly efficient on the surface, combining Paul Gautier threads with the accelerated energy of his gold Porsche, he also hints at the snarling beast within that is waiting to be unleashed. While the concept of designer villainy is not entirely original, it has never been better conveyed. The very nature of television itself assists the overwhelming insidious aspect of the narrative, giving it a documentary realism that invades your sitting room like a burglar. Essential viewing for the next four weeks.

Mary Whitehouse has complained to the Independent Broadcasting Authority about “The Fear” describing the first episode as deplorable.

Stuart Orme’s direction is strong and stylish and Iain Glen reveals the star quality that he has already shown in a couple of television films… It’s important we don’t all run for cover the moment a drop of blood is spent. Look in and watch out.

There are dreadfully few series compelling enough to make me watch every episode, but “The Fear” was one.

“The Fear” is the first essential viewing of the year. It is a bulletin from the Eighties, successfully reflecting the reality of many young people in Thatcher’s Britain-they want consumer goodies, designer labels, and flash cars and they don’t care how they are obtained. I praise the genuine invention, that jerks viewers out of that slump on the sofa.

Iain Glen’s performance as Carl Galton, the 24 year old Islington racketeer is never less than riveting. Coolly efficient on the surface, combining Paul Gautier threads with the accelerated energy of his gold Porsche.