You are here: Home / Theatre / Coriolanus 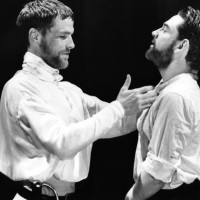 Kenneth Branagh is as formidable a Coriolanus as we have seen for some time. With his hair slicked back and nothing but a silver breastplate over his torso, he has a sweaty, thuggish look. Any Tom Brown would think hard before jumping into the ring to try his luck with this primeval Flashman. Yet the really alarming part of the Branagh anatomy, one more cutting even than his sword, is his tongue: I haven’t heard anybody, either actor or aspiring politician, sneer so stylishly in ages: There are no tendentious interpretations, no fancy “directorial concepts” here; just Branagh’s electricity, Dench’s truculent punch, Richard Briers’s Menenius, a complacent housemaster out of his depth with a prefect as headstrong as Coriolanus.

Iain Glen exudes toughness confidence and menace and looks ripe for brutality. He is devious to his fingertips. When he sweeps Corialanus up in a homo-erotic embrace it could be to crush the life out of him.

Volumnia herself is played by Judi Dench: a fine stern portrait:but there are lots of other good things, from Richard Briers’s Menenius À half fogey, half old fox À to Susannah Harker’s touching performance as Coriolanus’s wife. Iain Glen makes Aufidius an opponent fully worthy of his great rival.