You are here: Home / Theatre / Hamlet 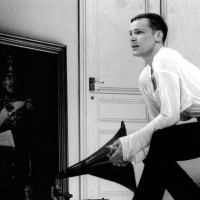 Iain Glen is a rampaging prince, quixotic, technically sound, tense as a coiled spring, funny. ‘To be, or not to be’ results from throwing himself against the white walls, an air of trembling unpredictability is beautifully conveyed throughout. ‘Oh, what a rogue and peasants slave’ is blindingly powerful. My life is drawn in angrily modern post Gielgud Hamlets: David Warner, Nicol Williams, Visotsky, Jonathon Price. Iain Glen is equal to them. He keeps good company.

Paul Unwin’s riveting production reminded me more strongly than any I have ever seen that the Danish Court is riddled with secrecy. Politics is a form of hide and seek: everyone stealthily watches everyone else. Iain Glen’s Hamlet is a melancholic in the clinical sense: his impeccable breeding and essential good nature keep in check what might be an approaching breakdown. His vitriolic humour acts as a safety valve for a nagging instability, his boyish charm is deployed to placate and deceive a hostile and watchful world. Glen brings out Hamlet’s fatal self absorption: the way he cannot help observing himself and putting a moral price tag on every action and failure. He is a doomed boy. And his chill but touching calm at the end is that of a man who has finally understood the secrets behind the closed doors.

This is an excellent production of Hamlet from the Bristol Old Vic. The director Paul Unwin and his designer Bunnie Christie have set the play in turn of the century Europe. Elsinore is a palace of claustrophobically white walls and numerous doors. All this is handled with a light touch, without drawing attention away from the play. Our first encounter with Hamlet shows him bottled up with rage and grief. Glen gives a gripping performance. The self-dramatising side of the character is tapped to the full by this talented actor. Hugh Ross invests Claudius with a fine sense of haunted dignity. Ophelia is movingly played by Claire Hacket.

Ian Charleson Awards 1991:
(These awards were established in memory of Ian Charleson, who died at 40 from Aids while playing Hamlet at the National Theatre in 1989)