You are here: Home / Theatre / Macbeth 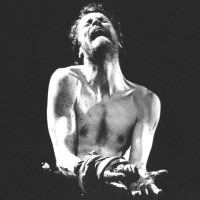 The Glasgow Mayfest has a production worthy of any great international festival: Iain Glen’s Macbeth at the Tron, directed by Michael Boyd, is the most exciting revival of the play since Judi Dench and Ian McKellen curdled blood at the RSC in the mid-1970s:Local hero Iain Gen completes a fine quartet of muscular Shakespearean performances. He is a very moving Macbeth, pitiful and dependent as his mind fills with scorpians, bent double with remorse before Banquo’s ghost. The onset of his resolution is frightening to behold. Glen is strongly partnered by Alison Peebles, whose Lady M is a wheel spinning free and coming to rest in the sleep-walking scene. The fight is tremendous and there is a particularly good Macduff from Peter Mullan.

The temptation to rave about Iain Glen in the lead role has to be measured against the production’s many riches. This is no imbalanced star vehicle, but an intellectually, physically and emotionally coherent interpretation that makes sense at every turn: Michael Boyd has made this 400-year-old tragedy, for all its set-text familiarity, fresh and alive, newly gripping and brimming with ideas. A production worth two or three return visits.

Iain Glen’s Macbeth is a performance of the utmost distinction. Lady Macbeth frets about the milk of human kindness in her husband: Glen is the first actor I have seen to show this in action. His Macbeth is both dreamer and doer, handsome, generous, frank-faced and anxious to be liked. His soldierly qualities seem beyond doubt:The Witches’ prophecy makes him uneasy: you watch the inner life of a highly emotional man being polluted by poisonous thoughts. His relationship with his spitfire wife (Alison Peebles) is more than just sexual À he is tied to her by a deep bond of feeling which strengthens rather than undermines his masculinity. This is a heroic Macbeth, but under the spreading mask of evil a sense of fugitive humanity keeps flashing at you. As the end draws near, Glen’s face begins to look battered and ravaged, a portrait of terror. He is both ominously calm and belligerent; symptoms of a permanent hysteria. Flecks of foam appear on his lips. A fallen angel.

The production, set to somber playing by three all-seeing cellists, is brimful of stunning devices that eschew familiarity and force a radical re-examination of the play. The final sword fight between Macbeth and Peter Mullan’s Macduff is a breathtaking and stomach-churning clash for survival and revenge.

– The Scotsman, by Richard Mowe

Glen gives a towering performance as Macbeth. His physical and emotional range is immense:It confirms its advance billing as a project which shows a way forward for the making of theatre in Scotland, not only as a collaborative funding effort but in the profundity of its artistic ambition.

Iain Glen’s Macbeth, directed by Michael Boyd, is the most exciting revival of the play since Judi Dench and Ian McKellen curdled blood at the RSC in the mid-1970s.

Glen gives a towering performance as Macbeth. His physical and emotional range is immense.