You are here: Home / Theatre / Royal Academy of Dramatic Art 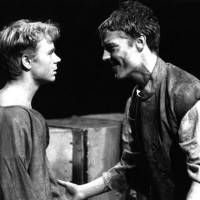 When I was offered a place at RADA I was determined to make the most of it. I had never really thrived in the world of academia, but now for the first time I was studying something that I actually had a passion for. One of the major benefits of the training was simply the number of productions; working with many different directors and performing in both studio and main house. It was the equivalent of permanent employment at such a formative period for any aspiring actor. Taking on a wide variety of roles that the profession would never have offered you even if you’d been lucky enough to find work. We were a very tight and I think gifted bunch and many went on to achieve fine careers in the big outside world. The principal was Hugh Crutwell who was an inspiration to every student who passed through RADA during his tenure. When we started working professionally Hugh always found time to come and see your work and was never shy of offering a critique. There was no-one’s opinion that I valued more highly.

An engaging, intelligent actor who sought such intellectual subtleties that his body and voice were forced to contort themselves in response. He is now much freer in resonance because there is more balance with breathing and, both in his speaking and singing voice, he finds increasing meaning and beauty of tone. His commitment is total.
– Geoffrey Connor

Technique:
Greatly improved in use of the body without force and with more ease and flow. Hollow back is still rather apparent.
To work on:
Explore even more the use of weight and flow in order to release images with more richness of texture.
– June Kemp

Letter from the Principal:

Congratulations on your really remarkable performance in Steppenwolf, it’s an amazing achievement: a most impressive centrepiece to a gripping theatrical experience. The show has come together magnificently and held the audience enthralled. I’m very thrilled for the whole group; and your contribution is invaluable. Well done! And thanks.

I’ll be seeing it again on Saturday.

Congratulations to Iain Glen and Ralph Fiennes for their excellent work, I hope they will both find the opportunities to use their splendid skills in future careers. The Bryan Mosley prize for best performance in armed combat went to Iain Glen, and it was a close run thing between the two. Ralph (who wins the Patrick Crean prize for outstanding performance in armed combat) was rather too kind in aiming slightly off target several times, and this lost him my prize. My view is that the more accurate the stroke the safer the parry can be, but anxiety of ten caused a last second diversion off target which results in parries being too wide or even to miss altogether. Nonetheless, a very finely matched and thought out fight.