You are here: Home / Theatre / She Stoops To Conquer 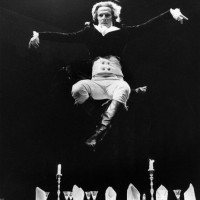 She Stoops To Conquer

With Peter Wood’s affectionate production of Oliver Goldsmith’s She Stoops To Conquer (1973), the Chichester festival Theatre has a real hit with which to end the season:This is one of the most purely enjoyable of all English plays, combining a superbly inventive plot with a wonderful generosity of spirit:Peter Wood is a specialist in this period and as always treats the text with respect:The star of the evening is Iain Glen, and significantly he shows us the unattractive side of Marlow as well as his more amiable qualities. There is something faintly repulsive about a man who sets about seducing the lower orders with gusto but becomes entirely tongue-tied with women of his own class, and Glen’s prissily fastidious performance lets us see the arrogance that is often the reverse side of shyness. But the point isn’t laboured, and the character is redeemed by comic suffering. In Kate Hardcastle’s presence he becomes so overwhelmed that just sitting on a chair becomes a nightmare of stiff, unwieldy limbs while his protracted stammering, the single work “Madam” holding him up for as long as 20 seconds before he finally spits it out, is as agonizing as it is hilarious. This is comic acting of a very high order:The captivating Susannah Harker brings both sense and sensuality to the role of Kate, and the tender relationship with her father, played with a cherishable mixture of kindness and indignation by Denis Quilley is beautifully observed.

Glen is wonderfully disarming and funny:paralysed by shyness with women of his own class but a bottom-pinching rake with the serving wenches. In the vicinity of Susannah Harker’s fine Kate, Glen develops an absurdly bashful-formal pigeon-toed gait, such as you might adopt if ever forced to process through Westminster Abbey naked, and his face virtually implodes with the effort of surmounting his dreadful speech impediment.

Chichester’s exuberant new staging of She Stoops To Conquer had the audience responding with wave upon wave of laughter and rounds of applause after several strong exit lines.

The star of the evening is Iain Glen.

This is comic acting of a very high order.