You are here: Home / Theatre / The Blue Room 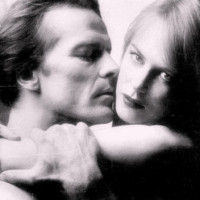 Hare’s free adaptation brings the piece bang up to date. Set in modern London with the shadow of Aids looming in the background. His script is also packed with excellent jokes. Mendes directs with precision and wit – all 10 sex scenes take place in a black-out, with a caption dryly informing us just how long each coupling lasts – though this most humane of directors also finds moments of unexpected warmth undreamt of by Schnitzler. Mark Thompson contributes a neon-lit set of impeccable minimalist cool, and there’s a hip electronic score by Paddy Cuneen.

Best of all there are Nicole Kidman and Iain Glen, each playing five characters with bravura skill, real feeling and a sexual charge that at times threatens to blow the roof off the theatre. Everyone’s reaction to this show is going to be conditioned by their own sexual preferences. Even I found time to notice that Glen is a handsome hunk with fine cheekbones, who ranges from London cabbie through awkward student to hilariously affected playwright with superb detail and definition. Kidman is a terrific actress who brings all five of her roles to instantly distinctive life, whether she’s playing a cheap tart, a sophisticated married woman, a coke-sniffing waif of a model or a femme fatale of an actress. In this production, you might just as well lie back and enjoy the sheer style and sexuality on display: it’s pure theatrical Viagra.

Sam Mendes has mounted a brilliant counterattack to the play’s drawbacks. First, his script is a new version by David Hare that is not just updated but upbeat. Second, and far more importantly for the word at large, he has cast two gorgeous creatures – Nicole Kidman and Iain Glen – to lay all the parts. Nicole Kidman has a delicate, lovely beauty that makes her instantly vulnerable on stage. Iain Glen meanwhile, turns in a cracker of a performance, both wonderfully charismatic and delightfully funny, as he slithers from one plausible liar to another.

One actor and one actress – Iain Glen and Nicole Kidman – play all the roles: five each. The result is a dazzling exhibition of acting, brilliantly and cunningly crafted but completely unostentatious. Kidman makes a thrilling stage debut, all the more so because in this small theatre, not the minutest nuance of voice or movement goes unobserved. Iain Glen returns from the work of big musicals to the straight theatre in glittering form. Hare’s version is, in the deepest and most essential sense, completely faithful to Schnitzler. His changes reflect Schnitzler’s point that sexual and social morality mutually shape one another, and that a sense of need and dominance are simultaneously sexual and social. Who you are and where you are make a difference.

Sam Mendes’s production has a masterly fluency, but it is never fluid at the expense of definition or clear lines of power.

Both performers have the skill and versatility to embody very different people in basic as well as surface ways. Together they give you glimpses of the excitement, wariness, pretension, hypocrisy, callousness, yearning and disappointment of the chase and its aftermath.

… you might just as well lie back and enjoy the sheer style and sexuality on display: it’s pure theatrical Viagra..

Best of all there are Nicole Kidman and Iain Glen, each playing five characters with bravura skill, real feeling and a sexual charge that at times threatens to blow the roof off the theatre.