You are here: Home / Theatre / The Crucible 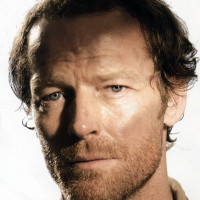 Yep, that’s six stars. The first full house the theatre section has awarded. Dominic Cooke’s intense, driven production brings new life to a play that can sometimes tip over into melodrama. It’s a real pleasure that this production is very much an ensemble piece. In the performance of his career, Iain Glen plays the hard-working, no-nonsense Proctor as a towering oak of a man. Michelle Terry is also excellent as a pent-up Mary Warren, as is Robert Bowman as the Reverend Hale, who desperately tries to control the madness he first unleashes.

Cooke’s gripping and gutting production. With stage presence to burn, Iain Glen is superlative at each stage of Proctor’s anguished journey, he conveys both the sturdy, rustic ordinariness of the character and his growing moral stature. You feel this Proctor truly could fall like a tempest on James Laurenson’s coldly determined Danforth and his court, if part of him weren’t so eaten up by guilt. When battered, fettered Glen sinks to his knees and struggles between a longing for life and a desire to do right; the naked, un-sentimentalised agony of it breaks your heart. Essential viewing.

The Independent, by Paul Taylor

Its last new production before their Shakespeare marathon, the RSC’s revival of Arthur Miller’s the Crucible is a riveting choice. Dominic Cooke’s superb production not only brings of the play’s political urgency but liberates it from historical naturalism. But the real revelation lies in Cook’s staging. While staying in period, he brings out the play’s metaphysical dimensions. Hildegard Bechtler’s set is a hinged white box that gives tantalizing glimpses of the Rousseau-like forest that lies beyond these clapboard houses, Jean Kalman’s magnificent lighting also shows sunlight penetrating the plain interiors as if seeking permission to enter. Nature and order are seen in opposition.

Iain Glen is sensational. His monumental John Proctor is a figure of Lawrentian power and sensuality eternally cursed for his momentary aberration with the teenage Abigail. Elaine Cassidy’s Abigail is not the usual diabolical nymphet, but a young girl whose sexual stirrings find no outlet in this community. And Helen Schlesinger’s Elizabeth Proctor marvellously completes the pattern by suggesting the physical coldness behind her charity.

Cooke directs a shatteringly powerful production that never relaxes its grip for a moment, and wisely allows the audience to spot contemporary parallels without directorial nudging. There are outstanding performances from Ian Gelder as the craven Rev Parris, James Laurenson as the icily authoritarian Danforth (all the more frightening because he genuinely believes he is doing God’s work), and Robert Bowman as the witch hunter who painfully learns the error of his ways.

What a fresh, unnerving air of topicality Arthur Miller’s allegoric masterpiece about the late 17th-century Salem witch-trials has achieved. Dominic Cooke’s remarkable production, with its keynotes of menace and simmering hysteria, premiered this September in Stratford-on-Avon, where I and a swarm of critics applauded it.

Miller’s hero, farmer John Proctor, superlatively brought to anguished, outraged life by Iain Glen in the performance of his career. Glen, a muted, staggering wreck of a man, faces his climatic, elemental struggle over whether to save his name or his life. As if to symbolize his escape the set walls open up as he walks out of the scene, which like The Crucible itself, leaves you overwhelmed.

This is one of the greatest plays by the greatest dramatist of the 20th century, and Dominic Cooke’s production rises to it with a sense of harrowing intensity. Iain Glen gives the most commanding performance of his career.

Dominic Cooke’s splendid, tense production reminds you of what a master of dramatic momentum Miller was. The ensemble playing is flawless and Iain Glen’s Proctor superb… the passion in his performance is consuming and unforced. He is a series of heatwaves, scorched by truth, hanging for it.

Iain Glen is sensational. His monumental John Proctor is a figure of Lawrentian power and sensuality.

With stage presence to burn, Iain Glen is superlative at each stage of Proctor’s anguished journey.