You are here: Home / Theatre / The Snow Queen 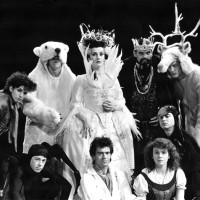 Heavens be praised, the Rep has come up with a marvelous Christmas production which will warm all our hearts well into the New Year. I believe that there will be nothing rarer and more beautifully played this Christmas than the wonderful moment when the Reindeer (Iain Glen) guides Gerda gently through the snowy wastes of the Snow Queen’s icy kingdom, Apart from silencing a theatre packed with small children, Mr Glen brought a lump to this hardened old reviewer’s throat. But Stuart Paterson’s play is truly magical and under Derek Nicholls’s inspired direction the Rep’s Young Company give us some splendid performances. Sir Barry Jackson would have sighed with pleasure at it all.

I warmed to the icy touch of the evil woman in a show which had all the magic of Hans Christian Andersen’s fairy story. This is a production to melt the hearts of young and old alike. The acting was excellent, with the highlight of my show the chat between two ravens, alias Paul Kiernan and Iain Glen.

Light relief comes from two squabbling, squawking ravens in which voice and movement are skillfully deployed to create two laughably comic bird-like characters by Paul Kiernan and Iain Glen, who also turns in a performance of gentle grace as the reindeer who brings Gerda to the gates of the Ice Palace.

The Rep’s Young Company give us some splendid performances. Sir Barry Jackson would have sighed with pleasure at it all.